for everyone who is missing someone this Christmas

I sing my heart out for my boy. I can’t talk to him, but I sing, I sing to him all the time with the choir.

“In my dreams, I see your face, walk with you, hold you safe.
Close my eyes, I think of you, until the day, I see you again.”

The Missing People Choir, who came to the public’s attention when they were catapulted to the final of Britain’s Got Talent 2017, are to officially release their hauntingly beautiful song ‘I Miss You’ to reach out to everyone who is missing someone they love this Christmas.

The choir is made up of a group of singers who have experienced the disappearance of someone important from their lives, and many are still searching for their missing person. This group is underpinned by a team of supporters who sing in solidarity with the families.

‘I Miss You’, was the first song that the choir ever performed in December 2014 at the charity Missing People’s Carol Service in St-Martin-In-The-Fields. It was written and produced by the choir’s director James Hawkins and sound engineer Simon Rhodes, with lyrics inspired by the words of Peter Boxell whose son Lee went missing aged 14 in 1988.

Cover artwork designed by Nina Gross, a choir member, in memory of her sister Alice Gross 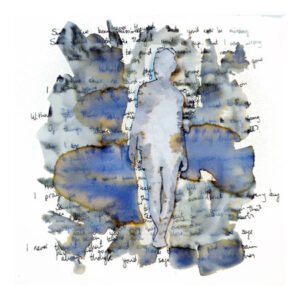 The cover artwork for the single was created by Nina Gross, a soprano in the choir, whose sister Alice was missing for a month in 2014 before tragically being found to have been murdered.

She says, “The words in the background are the original words by Peter Boxell that inspired the song, and the figure is based on a picture of Alice that was used a lot when she was missing.”

“This song touches everyone who hears it”

Choir Director James Hawkins said, “We have now performed all over the country, to small groups and huge global audiences, but there is one song in particular which always visibly touches the souls – and the tear ducts – of all those who hear it. There is something about the powerful simplicity of the lyrics, in combination with these families singing and reaching out to their missing loved ones which makes it palpably emotional, and touches anyone who has ever missed and yearned for someone they love.

It was this song that the choir first performed when they were brought together in 2014, and this one which brought us to the attention of Britain’s Got Talent, which resonated so strongly with the viewers that we ended up in the final 2017. We feel that now is the right time to release the song, as Christmas is such a difficult time for those who are missing someone they love and those who are missed.”

We’d love to hear from you

Please get in touch if you have opportunities for the Missing People Choir, or if you’re interested in using music to help your organisation or group. And you’re welcome to post your comments below too!